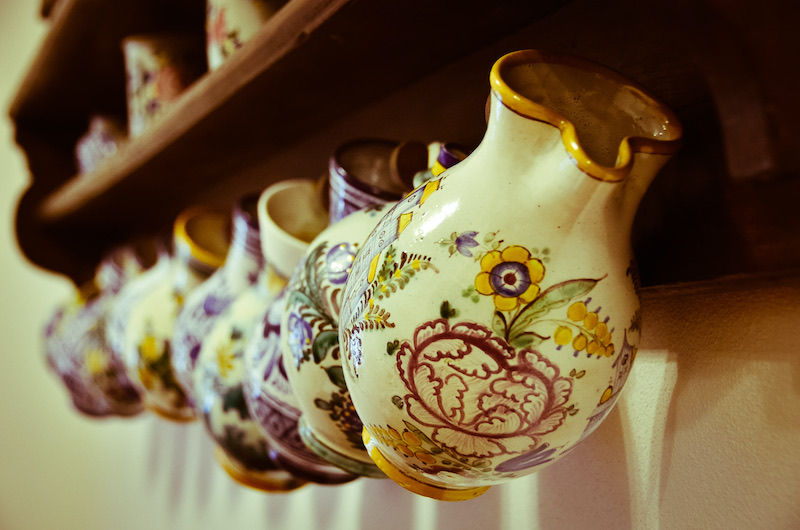 From evening to morning
drink wine and no mourning!
Whether you drink or not
once you’ll leave this world!
Don’t have a sour face,
just drink a wine with grace! 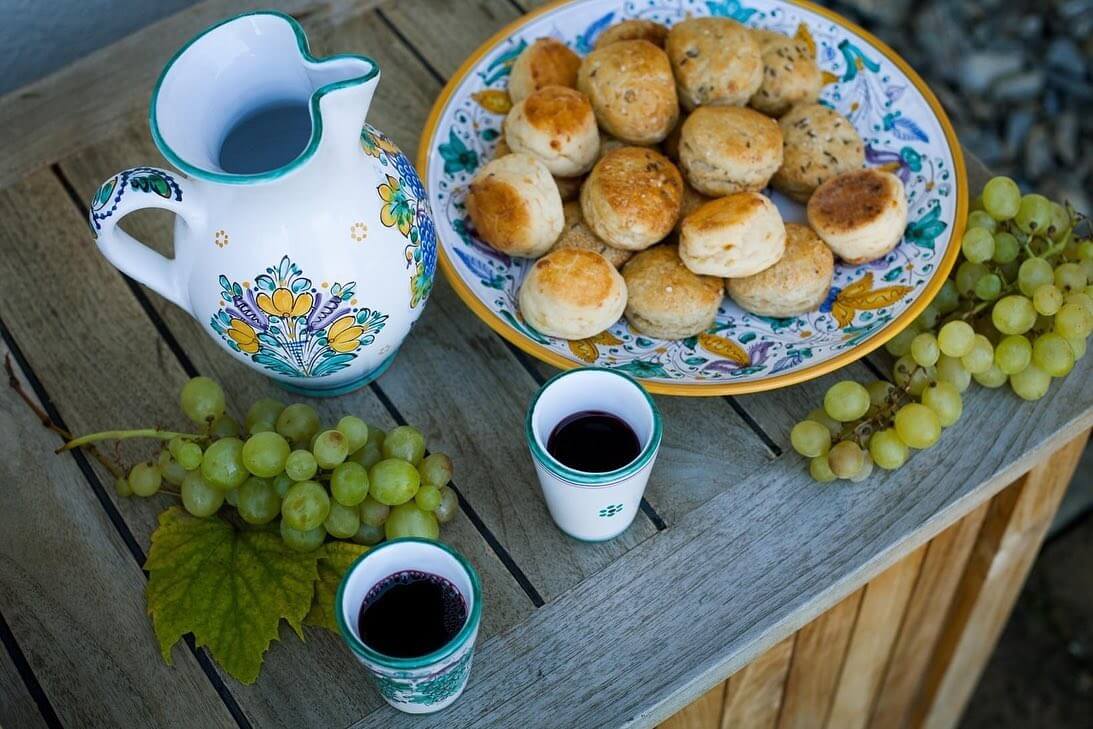 Pottery, i.e. the production of ceramics, is one of the oldest crafts. The first master of this craft was Lord God, because he formed Adam out of clay. Man, created in the image of God, began to shape clay about 25,000 years ago when he began making various statuettes. Archaeologists consider the production of wicker baskets lubricated with clay and burned on fireplaces to be the beginning of pottery. The first earthen kilns and vessels appeared in the 8th millennium BC. A great advance in the development of ceramics was the invention of the potter’s wheel. It was originally controlled by hand and appears in Egypt around the 5th millennium BC. As humanity evolved, so did the technique of making pottery, and the hand-driven circle evolved into a foot-driven circle. It is still used today, but it has already been improved with electric drive. 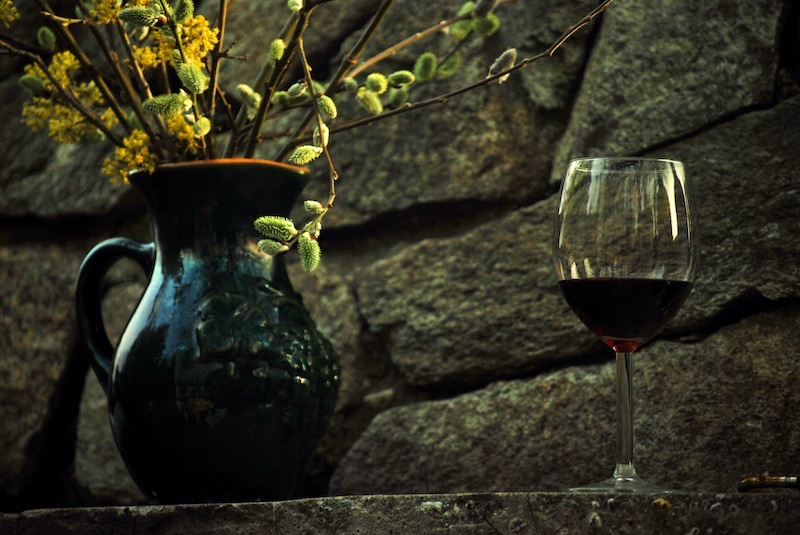 Ceramics refers to products made of clay, which were first dried and then fired in an oven at a temperature of 980-1000 °C. After the first firing of the clay, a shard of orange or brick colour is formed, which is also referred to as pre-firing or terrazzo. The term ceramic is therefore understood to mean all fired clay products which can be glazed or unglazed. The word pottery probably has its oldest origin in Sanskrit, where it meant burning, firing or traces, but we can also find it in the Greek word “keramos” – clay, or “kerameus” = potter.

Majolica refers to white glazed and subsequently coloured ceramics. The ceramic decorated in this way is placed in a second firing kiln at a temperature of 1000 °C. The result is high-gloss ceramics decorated on a white background. Already the ancient Egyptians, Babylonians and Chinese learned the technique of opaque white glaze. In European cities like Malaga (Spain), Delft (Netherlands) and Faenza (Italy), plates and jugs in are decorated with this tin-lead glaze. In Spain, the ceramics produced in this way were exported in bulk via the island of Mallorca to Italy. The etymology of the word majolica therefore refers to the well-known holiday island of Mallorca, whose name is pronounced in Spanish “Majorka”. Such ceramics were produced in Europe in the 15th to 17th centuries and were brought to our territory by the Habans. 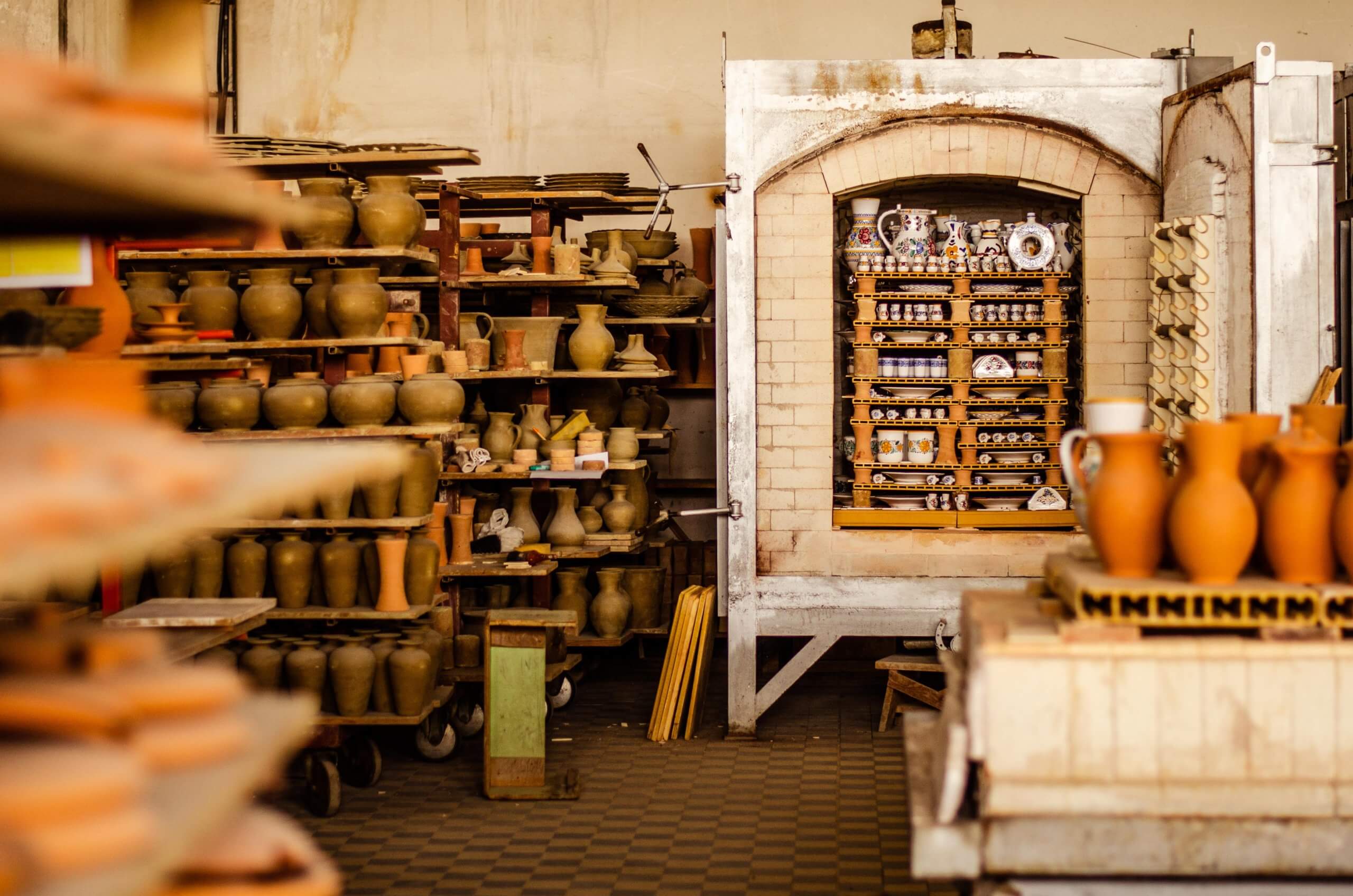 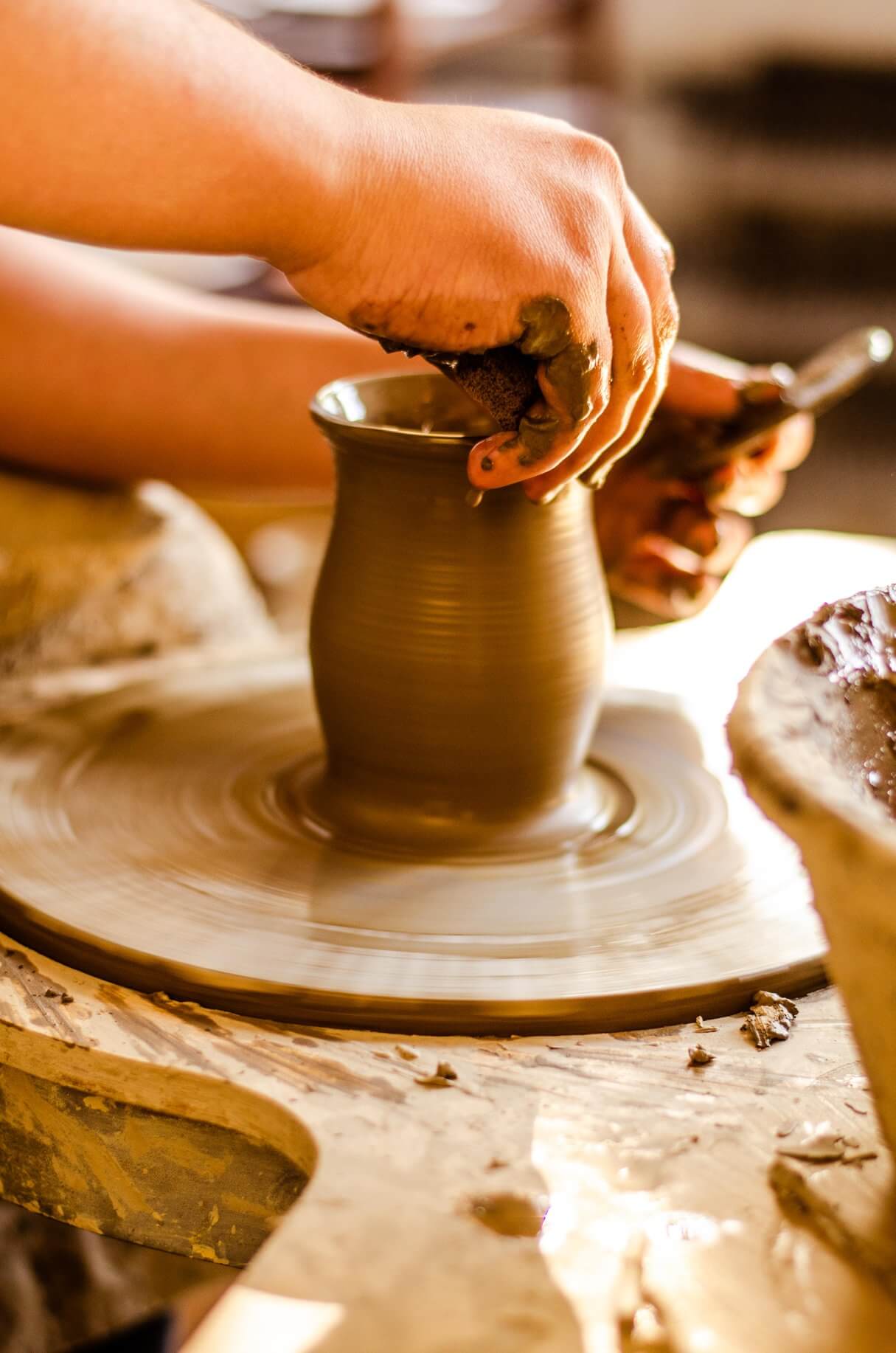 In Italian territory, however, such pottery with white pewter glaze is called faience, which is derived from the city of Faenza in the north-eastern province of Ravenna. Opinions on ceramic nomenclature vary. According to the potter and pedagogist Pravoslav Rada, faience is just pottery with white covering glaze and majolica with colourful pottery with coloured glaze. Therefore, it also encounters concepts other than majolica. In Britain, the term faience is not used that much. White glazed pottery made in Italy during the Renaissance is called maiolica. Lead-white glazed ceramics from the 19th century is then called majolica. The secrets of white glaze production were learned by Italian masters and brought to our territory by the Habans. 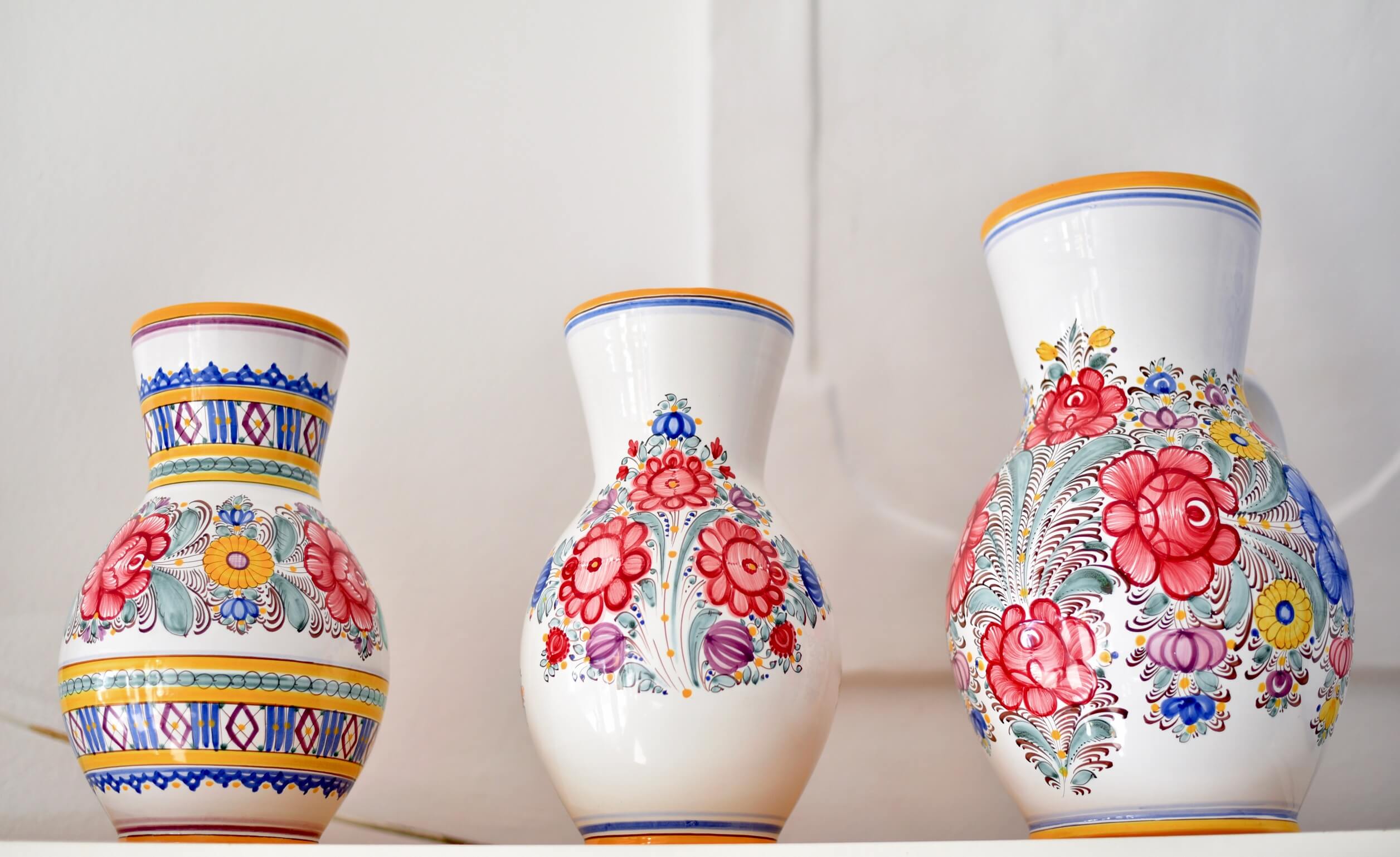 The term Habans refers to a religious group of re-baptized people that existed in the 16th century in Switzerland and sought to reform society. Their confession refers to the Bible and the deeds of the apostles. They did not recognize baptism at birth, but only in adulthood, so they are also referred to as Anabaptists. They did not recognize church or secular power, lived in closed communities and shared property. They built large multi-storey houses with a common courtyard, where their work and social life took place. The name “Haban” is first mentioned in a document from 1667. One of the theories of naming Haban is derived from the phrase “haushaben”, ie to have a house in German. According to František Kalesný, an expert on Haban ceramics, this is a derivation from the Hebrew “habani” translated as the true children of God. The Habans were persecuted and expelled for their attitude towards the church and the nobility. They settled in Germany, Austria, South Moravia, Slovakia, Transylvania, the Netherlands, Italy and Russia. Some of them went to America and Canada, where they live as an offshoot of Habans called Hutterites or Amish.

The Habans were very skilled craftsmen such as swordsmen, weavers, carpenters, joiners, knife makers, leatherworkers, saddlers, furriers, ceramicists, millers, but also builders of water mains, towers and bridges. The Moravian and Hungarian nobility, due to their skill, reliability and diligence, settled them in their courts.

Haban ceramics or Haban faience means ceramics produced since the 16th century in Moravia, Slovakia and Transylvania. The Habans used four basic colours – blue, green, yellow and purple, and black to highlight the contours. The use of red was banned for religious reasons. We can divide the products into three basic groups. The first group includes bowls and plates. The second consist of jugs, medicine jars and other hollow objects. The third group involves ceramic tiles. Initially, the Habans adhered to strict religious regulations that forbade them from depicting people and animals. Typical ornaments were Renaissance floral and rinceau patterns such as tulips, pomegranates, cloves, lilies of the valley and trees, as well as architectural and geometric patterns. The customers of this highly radiant pottery were the aristocratic courts.

In the 17th century, Haban religious communities have been gradually disintegrated, and since the 18th century we can talk about the phase of late Haban ceramics, which is marked by the influence of local ceramic production. The last living Haban was considered to be the ceramic figuralist Ignác Bizmayer, for whom the town of Modra established an independent gallery in 1994. You definitely have to visit it, it’s worth it. Every year, tourists from all over the world come here and admire the masterpieces that received the presidential visit as a gift. You can visit the visit yourself or as part of the Keramická Modra tour. 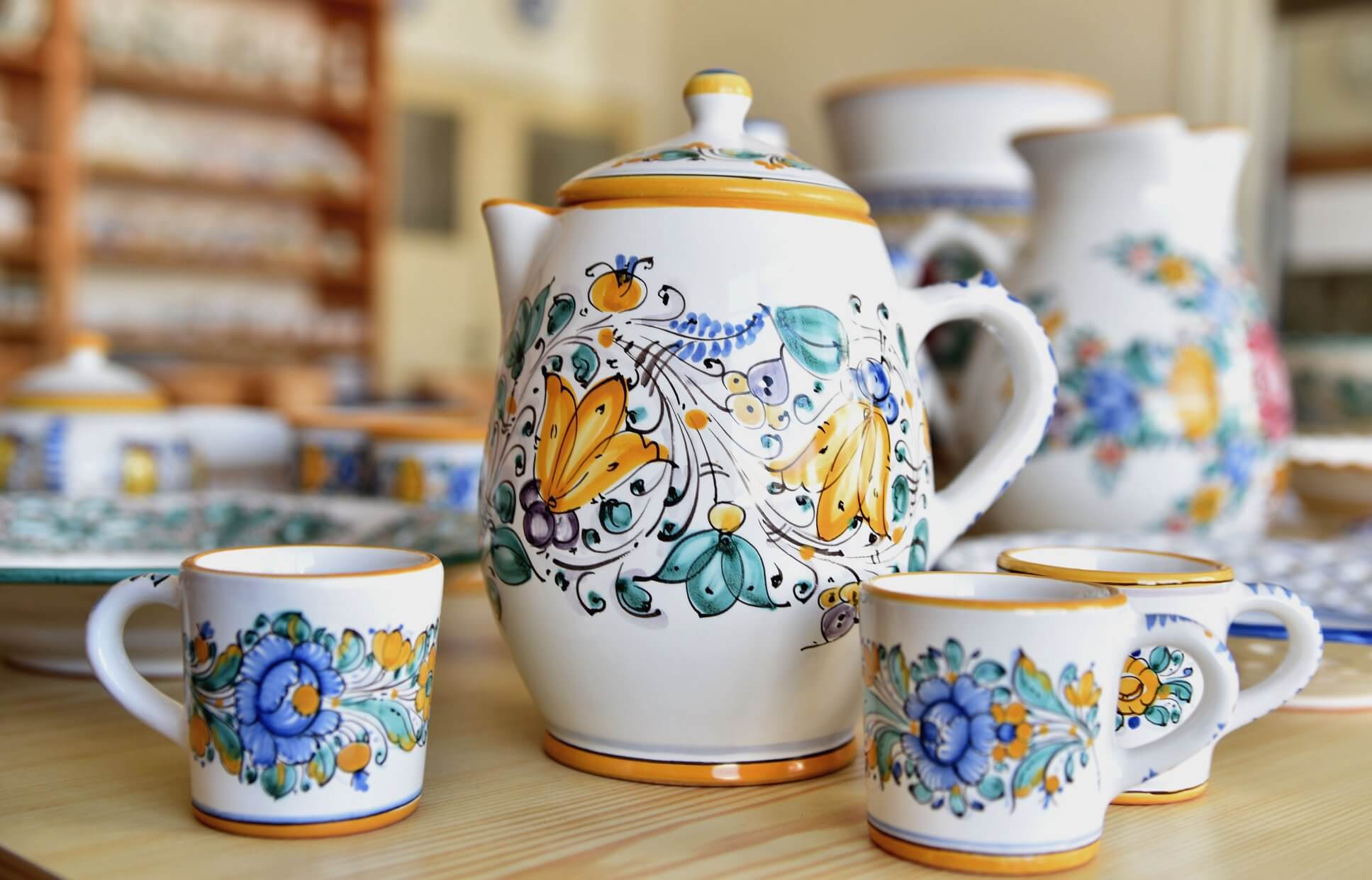 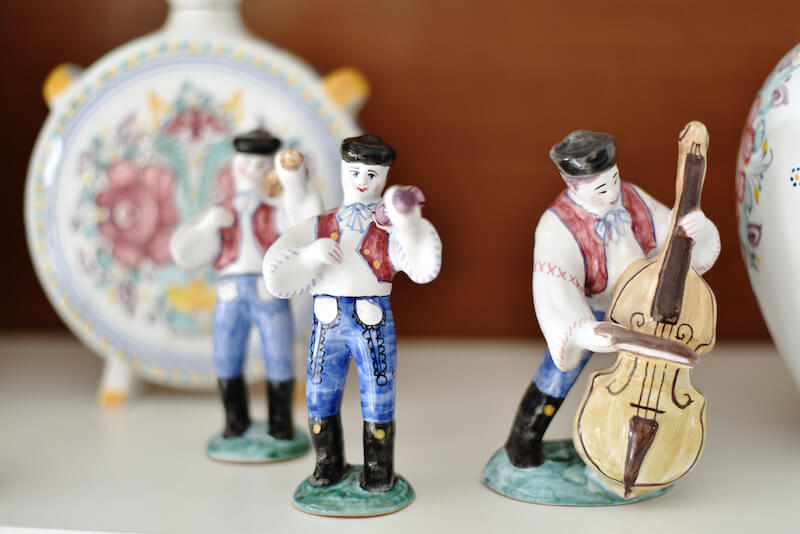 Ceramics have been produced in Modra since time immemorial. Already in the 14th century, smoked black ceramics were produced for black kitchens. However, the oldest written mention of the potters in Modra comes from the town book from 1564. The craftsmen were first associated in fraternities and later in guilds. The potter’s guild is first mentioned in Modra in 1636. Potters produced everyday objects, but especially dishes such as pots, pans, water jugs, wine jugs, bowls, mugs, baking pans, various containers, aspersoriums, small toys, but also tiled furnaces. Modra was also the main centre for the production of pottery. The potters used colourless and coloured glazes, especially green, yellow and brown. Various techniques were used for decorating, such as decorating with coloured clay, combing, marbling or horn-dyeing. 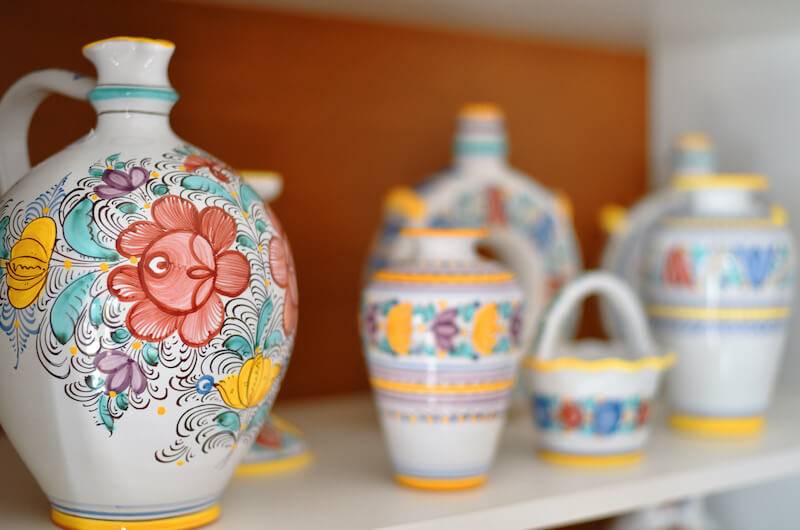 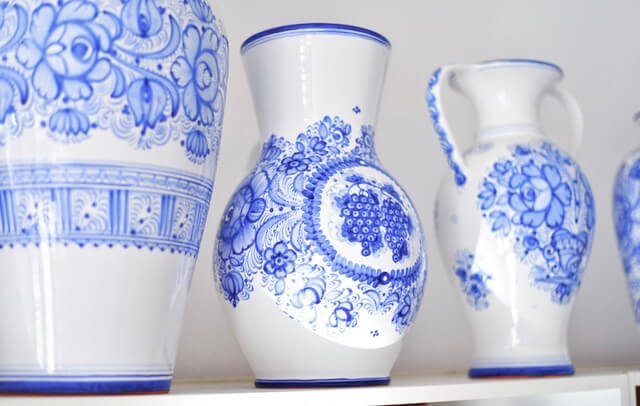 In Modra, we can talk about majolica or faience, ie white glazed ceramics, only after 1830. It is said that the Haban Jozef Kita from Suchá nad Parnou brought it to Modra. The Habán court in Modra did not exist, but the Habáns had their ceramic workshops in the surrounding villages in Košolná, Častá, Horné Orešany, Dechtice, Boleráz and Dobra Voda. As a pottery center, Modra gradually attracted Haban masters, who enriched and magnified the Modra ceramic tradition. However, after the abolition of the guilds by Joseph II in 1872, the question of who would continue the pottery tradition came to the fore. Thus, in 1883, the town initiated the establishment of a ceramic vocational school, which gradually became a prosperous company. The school produced various types of food and a range of jugs. The building where the ceramic school began its history is declared a technical monument. Today, the Majolika Hotel is located there, which also includes a ceramic museum with a preserved Kassel kiln. At present, Slovak Folk Majolica continues the famous ceramic tradition in the retro building from 1973. The importance of its historical and social value was completed by the entry in the list of intangible cultural heritage of the Slovak Republic in November 2017. Majolica ware from Modra still has something to offer the young generation. In addition to traditional patterns and ornaments, it also produces new modern collections and jewellery. 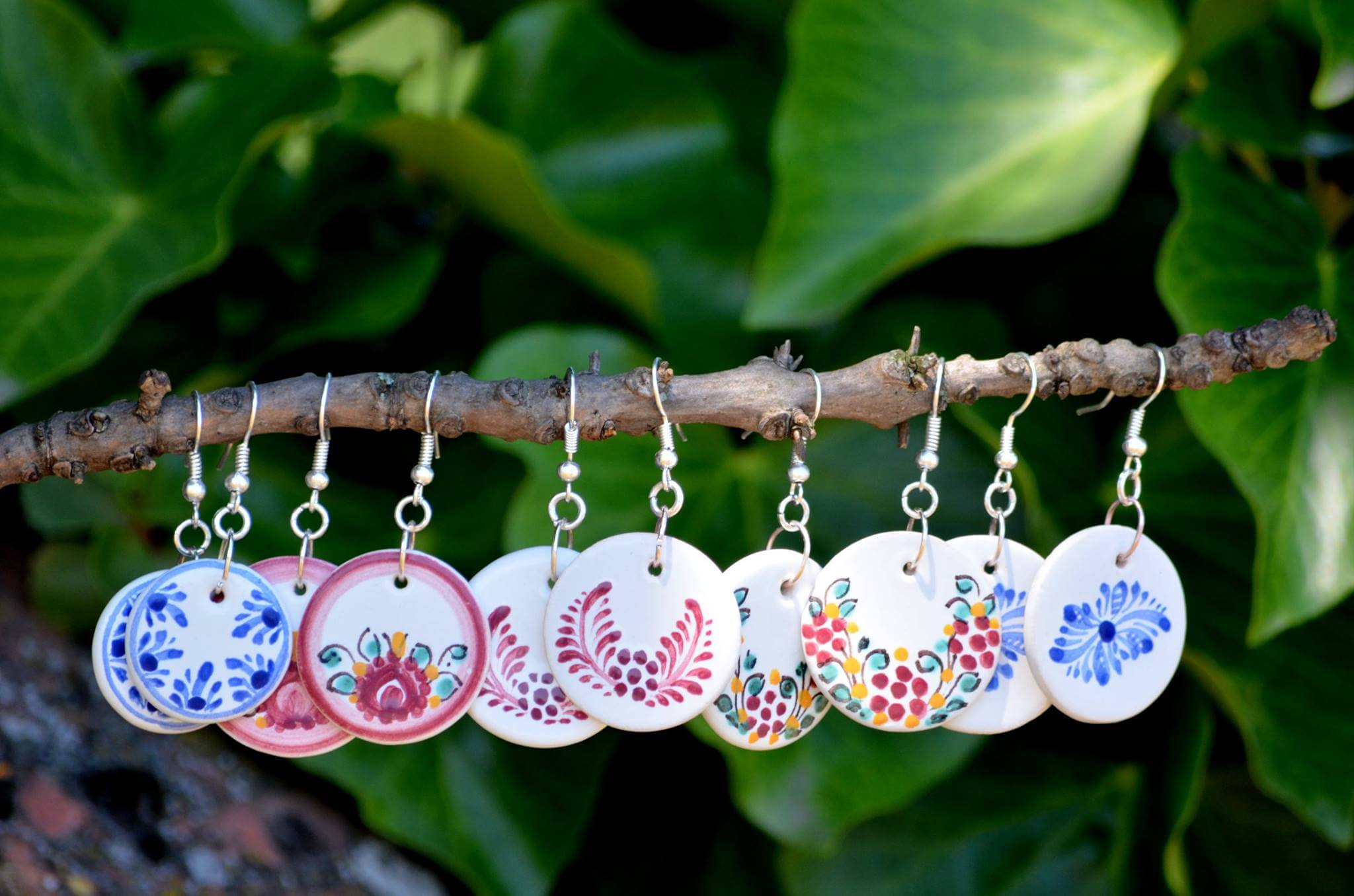 Slovak folk majolica produces ceramics in four traditional patterns. You can read about the history and transformations of majolica ware from Modra in the latest publication Slovak Majolica in Modra
As a bonus, the book offers an original cover in four versions, with each piece presenting one decor of majolica ornamentation. 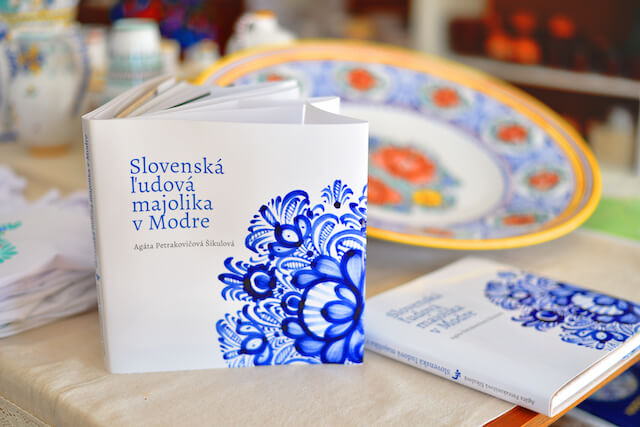 Green decor – a little known but very attractive decor that you must have because it is not shabby.

Blue decor – Modra has its name from the Slovak word for blue (modrá). Do you know why?

Haban decor – uses all colours of colour decor except red. 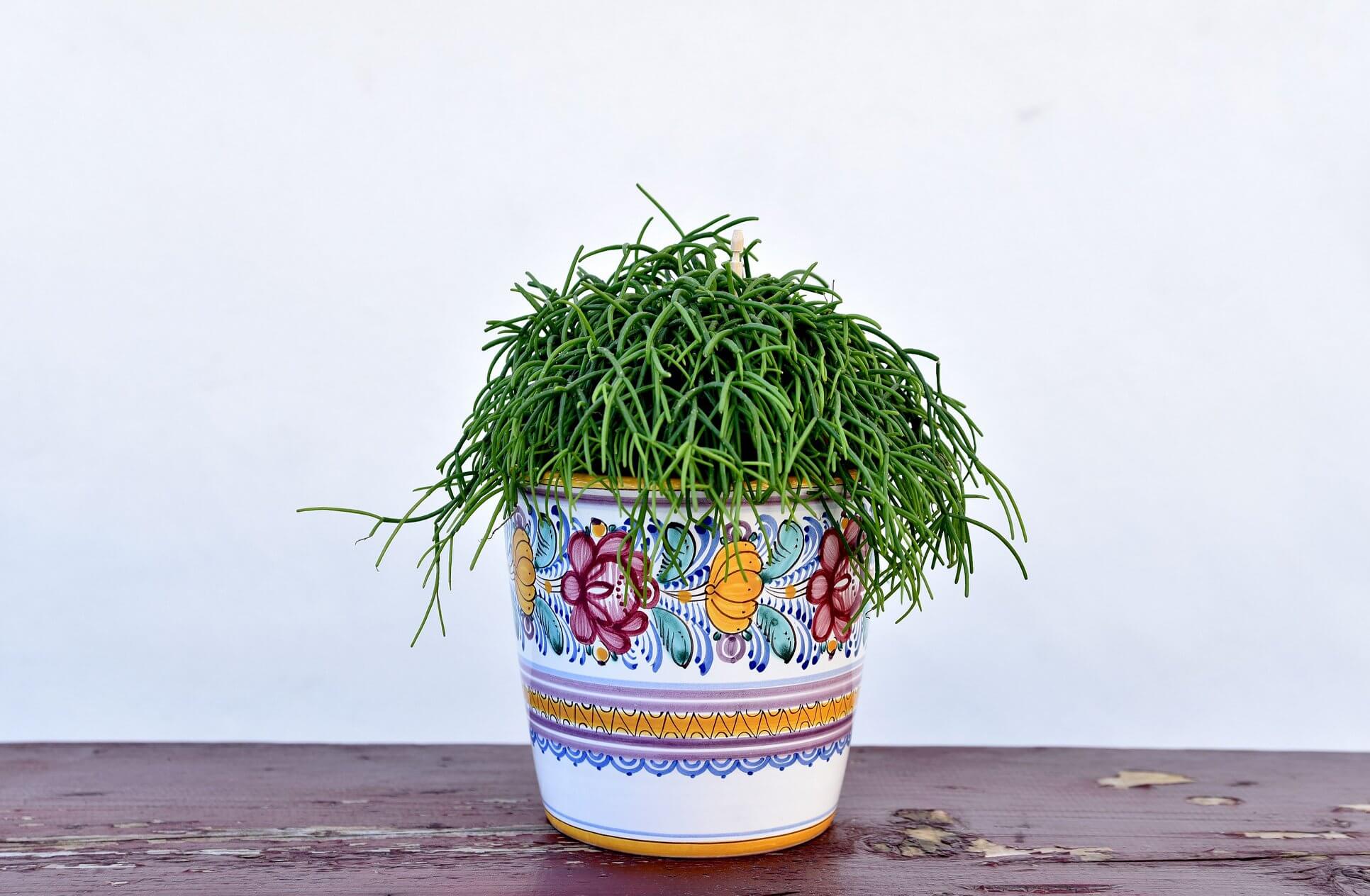 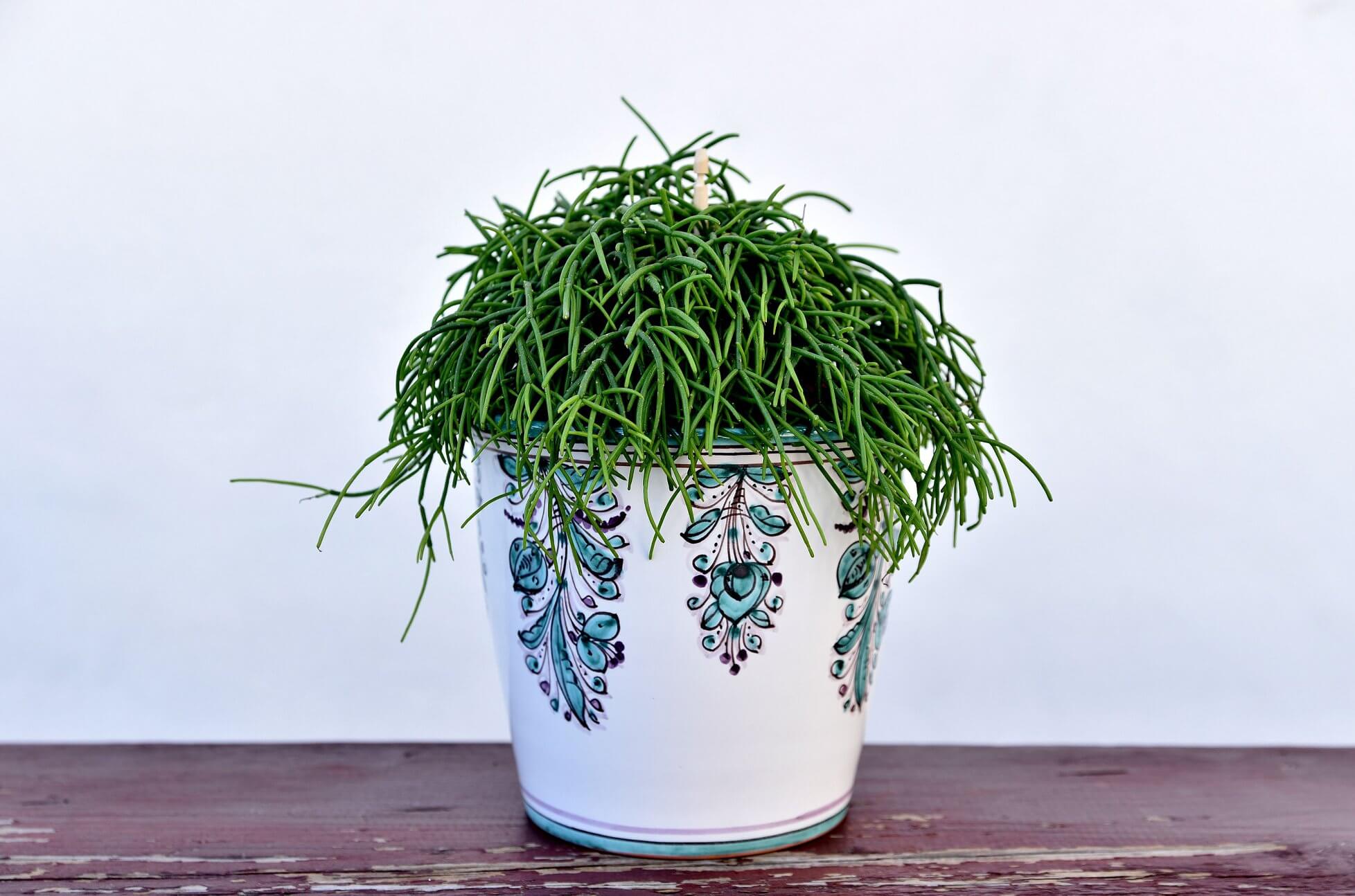 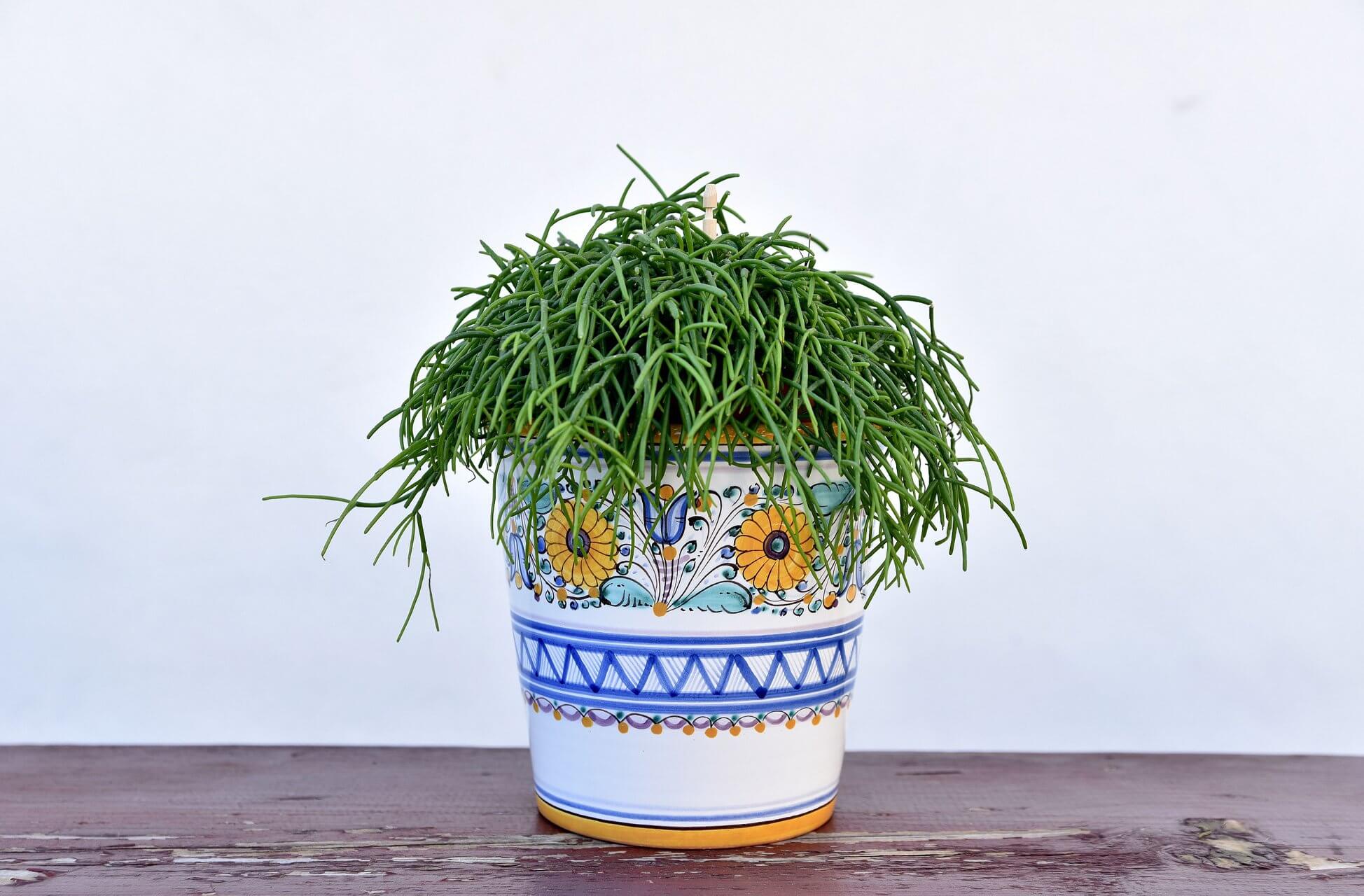 If you want to spin the pottery wheel, see the largest car chamber kilns in Slovakia, paint your own mug or jewellery, we recommend an excursion in Majolika. Happy Mondays in Modra are suitable for those who like to combine a tour of the ceramic workshop with a city tour, a good lunch and photos from a local guide. Write to us at info@modratours.com or call 0903/505152 and we will be happy to advise you on other ceramic workshops that you can visit in Modra.